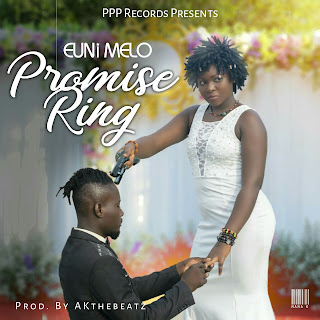 Euni Melo haven’t only proven her worth as an artiste but has built herself a very enviable brand just within these few months of her musical career, currently working under PPP records, Euni Melo in her first 6 months of professional music have seen an upgrade in her career where the young lady have released about 6 singles, gained 4 nominations in multiple awards and won 2 awards in the just ended Grande Earth social Media Music Awards. She first grabbed a nomination in the Gome Awards and most recently the Dancehall Song of the year category of the Emerging Music Awards. Her lyrical prowess is unquestionable and her best is yet to be seen as she readies her maiden album titled Meloidies to Melo.
Off the yet to be released Melodies to Melo album come this intriguing piece titled Promise Ring, The promise ring these days have become a fashionable item which men use to raise hopes of females in a quest to marry them in future. Some of these promises may lead to marriage whereas others may lead to pure disappointments.
This was the inspiration behind Euni Melo’s new single Promise Ring, a song prepared with an amazing Visual to tell a story of how a guy betrayed his Fiancée to marry another lover, watch full details of the story in the Promise Ring Video shot by Golden Wabbit and Round The clock visuals and directed by Golden Wabbit
Euni Melo_Promise ring_(prod by AkThebeatz)….. [DOWNLOAD]
https://youtu.be/p4zfvnEspPA
https://youtu.be/p4zfvnEThspPA
https://ampl.ink/gq50r