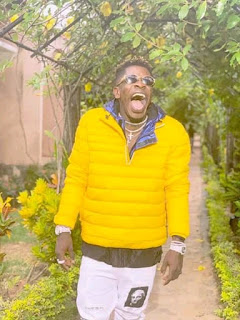 The issue emanating from the camp of Shatta Wale and 4syte TV is not the very best all other things being equal.
Historically, this isn’t the first time Shatta and 4syte TV have had a bad blood. Although they were able to settle their differences in the past but it looks like old wound has been resurrected.

The genesis is the emerging beef has to do with the failure of 4syte TV, the leading entertainment television channel in Ghana, to play songs of Shatta Wale for obvious reasons.

Per our checks and taking into consideration a post by Shatta Wale on social media, 4syte TV is expecting the self-proclaimed Dancehall king to promote 4syte TV by sharing their flyers.

However and to the best knowledge of Shatta Wale, why should posting and sharing of flyers be the sole requirement for the playing of his good music videos!.

It’s in this light that Shatta has descended heavily on 4syte TV by describing them as fools and other uncouth words. Shatta further quizzed if 4syte TV asks Nikki Minaj to post their flyer before playing her songs?

See the brutally uncensored screenshot below: 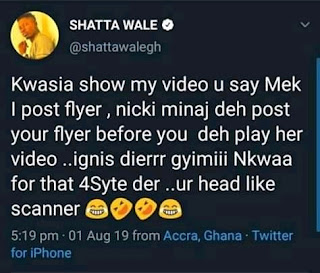