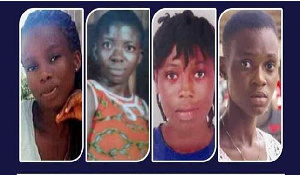 The grandfather of one of the Takoradi kidnapped girls, Emmanuel Abeka has revealed in an interview on Ahotor Fm that, his granddaughter, Ruth Abeka is not dead as reported by the police on Monday evening.
Speaking with Citizen Kofi monitored by MyNewsGh.com, he said, someone has told him his granddaughter is alive and has been seen around Sowutuom, a suburb of Accra.

This comes a day after the IGP, Mr James Oppong-Boanuh announced at a press conference that the DNA test conducted on the human remains retrieved at one of the kidnappers’ house in Takoradi has proven positive.

According to Mr Emmanuel Abeka, the test results cannot be entirely true since he was phoned last Friday and told that his granddaughter has been seen at Sowtuom loitering about.

“The police IGP and his cohorts are very insensitive! How can you hold an issue like this without first consulting the immediate families,” Mr Abeka questioned.
Mr Abeka sounded very dejected and disappointed at the new development.

The Ghana Police Service yesterday confirmed that the four missing girls in the Western regional capital Takoradi are dead.

The Ag. Inspector of General of Police, James Oppong-Boanuh, however, said at a press conference Monday, that the results of the DNA test on remains retrieved in Takoradi have been relayed to the families along with condolences.

Rocky Dawuni will be performing LIVE at Skirball Cultural Center in Los Angeles on Thursday, July 28!

Medikal is the best rapper in Ghana -Kelvyn boy