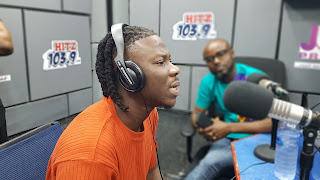 Almost a week ago, dancehall artiste Shatta Wale revealed that himself and Stonebwoy will never return the plaques won at the 2019 VGMAs.

Apparently, Charter House, organizers of the award scheme and the board as a means of punishing the two artiste who caused chaos at the 2019 VGMA asked both dancehall artistes to return their plaques aside the ban from the scheme.

However, Stonebwoy, speaking in an interview with Andy Dosty on Hitz 103.9FM revealed he is never going to return the plaques.

According to the dancehall gem, it will be pure disrespect to return the plaques to Charter House. He explained that he didn’t steal those awards hence does not see why he should return things his fans voted for and had won on the eve of the event.