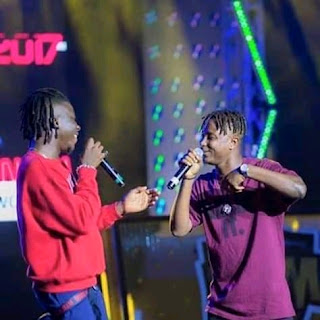 CEO of Burniton Music Group, Stonebwoy has reacted to his former label signee, Kelvyn Boy’s video of apologising to him while performing in Italy,  which popped up yesterday.
Yesterday, updates Guy, reported that Kelvyn Boy has apologized to his boss Stonebwoy while performing in Club Dandy,  Italy.  In the video Kelvyn Boy was seen telling the audience that anybody who knows Stonebwoy should help him apologize to Stonebwoy if he has wronged him in anyway.
Watch Video Of Kelvyn Boy’s Apology To Stonebwoy.
Few moments ago, Stonebwoy, was interviewed on Citi Fm’s Traffic Avenue by Jessica.  She asked Stonebwoy about Kelvyn Boy’s apology video. Stonebwoy replied saying, Kelvyn Boy only did that for the media and he never meant it. He added saying,  the people whom he asked to beg  him on his behalf don’t know him(Stonebwoy) than he does.
About Kelvyn Boy,  Stonebwoy said his contract with the label ended eight months ago and Kelvyn Boy hasn’t made any move of renewing his contract therefore a press release will be out this evening of Kelvyn Boy’s exit from the label.

Stonebwoy is Very Intelligent, I Couldn’t Even Imagine How Brilliant That Guy Is – Co Founder of AfroNation, SMADE Praises Stonebwoy