The Defence Intelligence Unit of the Ghana Armed Forces wrongfully arrested some three Ghanaians and seven other foreign nationalities for alleged fraud.

The foreigners were made up of two Chadians; Hassam Mohammed 39 years and Daniel Fadel 40 years, a Jordanian; Mohammed Tasil who is 34 years, and a Libyan Mohammed-Sallam-Mohammed who is 50 years. 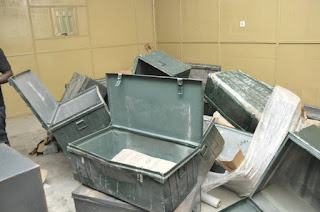 Others were a Burkinabe Mubasil Samfo 23, a Malian Mariam Abdallah and a Syrian – Maharan Zakaria.

Their Ghanaian counterparts, CEO of Global Link Ghana Alhaj Yakubu Yahaya, CEO of ADFAT Alhaji Adam Jibril and Derrick Salome were mistakenly identified as the leaders of the syndicate which had no merits.

Earlier that morning, a group of military personnel ransacked the premises where these individuals were working claiming there was a tip off that there was an attempted fraud going on at their location.

There were no complainants or police among the set of men making those claims.
A thorough search was conducted by the men and nothing was found.
They then demanded for a Ransome, which was refused by the alleged suspects, which led to the men calling the media to report the incident and marched the alleged suspects to the Military police unit at Burma camp.

“We are no more in the military regime were armed men can walk in without any authorization and demand ransoms for something which has no, fact, evidence truth or whatsoever” a rep of the alleged suspects said