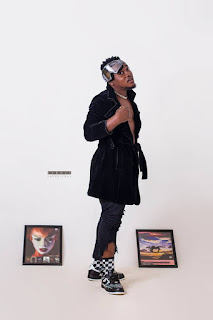 One artiste whose is gradually becoming a daily talk on the lips of Most Ghanaians secular music lovers most especially to his fellow Gadangme’s, recently is Nii Ardey Ankrah known as NII Funny in his showbis cycle . Most known for the creativity, stage craft and passion he exudes when singing, Most a-times he composes and performs his songs in his native Gadangme language and exhibits and projects some Gadangme culture.Nii Funny , as his stage name goes, is gradually carving a niche for himself as a must- hear secular artiste of our time. Filled with some energetic stage performances of what We knows and thinks of how to do things best whenever he gets the chance to showcase his talent to the world .His music has touched many music lovers and still domestically doing well in his own ways.

Nii Funny  has had the opportunity to work with several great and upcoming artiste in the industry such as Epixode ,Wisagreid ,Luther,Bandybwoy ,and real Teshieboi .Nii Funny has also been blessed to perform with great African musicians across the Globe like Shatta wale, Stonebwoy,Sarkodie,Bright of Bukbak ,Ayigbe Edem ,EL ,Masaany and Luther on the same stage and also been able to set up his own annual show to project his talent more to the world.
I know Nii Funny ,Teshieboi ,king Jerry ,Masaany and others will love to get nominations in Our upcoming prestigious award scheme in the country .
For the betterment of Gadangme .

His first album, which features some of Ghana’s most upcoming musicians, Real Teshieboi ,Wisa Greid and  rapper Teephlow .The album as produced by many well trained producers stated softly to spread faster“… Is a way of showing love to his fellow musicians and sends message to; for putting in more hard work and determination over the years”, For sometime now most entertainment stakeholders should get glued to his social media handles for more music.He has indeed been a great musician and he deserves to be recognized.

Nii Funny has released a lot of good songs for his credibility in the music scene .His first hit song Was Judas Then ,Goliath & Education
Broken Heart (Yooko ebreakimi) ,Became The Biggest Song, After That Aaye, which featured real Teshieboi,Loan Marriage, Gbogbo, Afuts3 ,Ogbemi Oye and now to the most anticipate song NKITIKITI and we hope for good things ahead of him in the music scene
.
One of our favorite vocalists regardless of the
Netflix & Chill generation love him
When he drops a verse for you,forget .

Nii Funny has a very huge  purpose for his music carrier and to his music lovers as well.