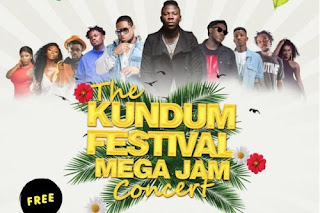 Headlining once again is dancehall act Stonebwoy. Also on the bill are D-Black, Kwaw Kese, Medikal, Kofi Kinaata, Sefa, Fameye, Nero X, Ms Forson.
DJ Breezy and DJ Que will man the turntables for both events.
Patapaa is joining the list and so is talented highlife musician Bisa Kdei. The two acts, together with the others, are gearing up to thrill patrons to a night of unforgettable music and entertainment.
The Mega Jam will be followed by a massive Pool Party Jam at the Axim Beach Resort on Sunday, September 15.
The Kundum festival is celebrated by the Ahanta and Nzema people of the Western region of Ghana. It is celebrated to thank God for the abundance of food at the times of the harvest period.
This year’s jams, powered by Livewire Events, are under the auspices of Hon Catherine Afeku, Minister of State and Member of Parliament for Evalue-Ajomoro-Gwira and Hon Frank Okpeyen, MCE Nzema East.
Patapaa, the leader of the Pa2Pa Soldiers, is storming Axim in grand style as he has been named as the latest addition to the impressive list of acts billed to perform at the 2019 Kundum Festival Mega Jam Concert.
Arguably one of Ghana’s biggest acts currently, Patapaa is joining some of Ghana’s biggest acts for the 2019 edition of the concert which has now become an integral part of Axim’s entertainment calendar.
Last year’s Kundum Festival Mega Jam Concert went down as the biggest musical event to have ever been staged in Axim.
Recording unprecedented numbers in terms of attendance, the concert, which climaxed the 2018 Kundum Festival, witnessed performances from some of Ghana biggest acts.
Last year’s concert saw performances from Stonebwoy, D-Black, Wisa Greid, Kofi Kinaata, Kwesi Arthur, Kidi, Kuami Eugene, Dahlin Gage, Sefa, Freda Rhymz, Osayo and more.
Organisers are building on that success to treat residents of Axim and its environs a bigger event this year.
To turn things a notch higher this year, Ghana’s A-list acts have been lined-up to thrill patrons who will throng the Victoria Park on Saturday, September 14.
(Source: Event Guide Africa)