Connect with us
A social media user, Judith Juahia has leaked a photo of a lecturer who she allegedly traded ‘sex for grades’ with her in 2016 but failed her for reasons best known to the lecturer.
According to a social media post sighted by ghmusiczone.com , Judith Juahla, a Kenyan lady stated clearly that she agreed to sleep with the lecturer in exchange for a better grade in her academics.
To the surprise of Judith Juahla, the lecturer gave her an “E” instead of “A” because “she did not allow him to ejaculate inside her”.
Judith’s revelation comes at the back of BBC’s
expose in reference to West African Universities’ lecturers who have intercourse with their students by promising them good grades.
See post below via screenshot. 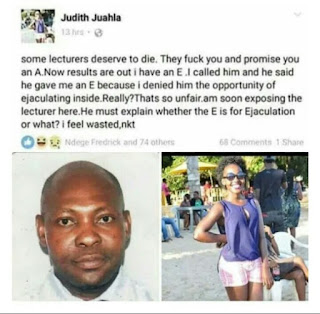