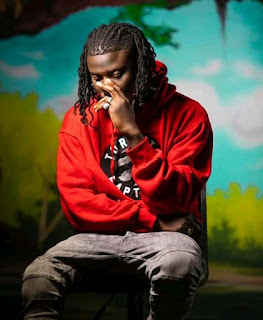 It has been confirmed that,  Stonebwoy’s annual Ashaiman To The World Concert will be happening this year.

Several weeks ago till now, it’s being rumoured that, one of the biggest outdoor events in Ghana, Ashaiman To The World, which organised by Stonebwoy yearly to honour the people of his town Ashaiman, won’t be taking place this year and several people in Ashaiman and other Bhim fans are worried about it.
Reason why people are speculating the absence this year’s edition is, it’s been alleged the authorities of Ashaiman have sold the site for the concert to a private entity for  construction of a mall by the Chinese people.

But it seems all those rumours are false, about an hour on Instagram, Blakk Arm Group which is managed by Stonebwoy’s former manager Blakk Cedi, gave a reply to fan who is worried about the absence of Ashiaman To The World this year.

Blakk Arm Group posted a photo of Stonebwoy with dates of his October Tour in America. Under this post a Stonebwoy fan made comment asking about Stonebwoy’s internal shows Ashaiman To The World and Bhim Concert whether they will be happening or not. Blakk Cedi replied saying ” They are all happening by the grace of God”. See screenshot below; 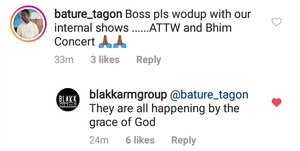