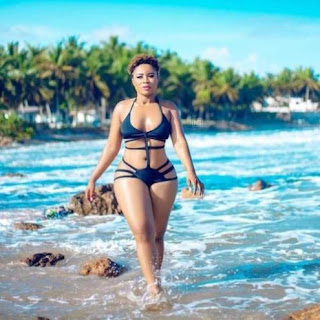 Kisa Gbekle has made very damning revelations about her personal life.
According to the beautiful Ghanaian actress, she broke her virginity at the age of 12, and she had to sleep with men to make money for upkeep, thence.

‘The Miser’ actress revealed that, her actions then, became necessary as a result of the extreme financial difficulties her family was facing, when growing up.

The host of ‘Business Of Entertainment’ (BOE) on GhOne TV made this known in an exclusive interview with blogger Zionfelix on the ‘UNCUT’ show.

“I broke my virginity at age 12. I had a very bad background so I had to take things into my hands. When you are from a very poor home, you do everything to make it in life,” she stated.

Kisa also mentioned that sh had to drop out of school because of the tough situation, during the time.

“I started doing that to take care of myself and to pay my fees.

I had to drop out of school because there was no money,” she noted.
Over the years, there has been allegations of female entertainers having amorous affairs with superiors in order to break into the industry.

The actress reiterated that some of the actresses sleep around, just to look good for the gram.

Kisa Gbekle was recently announced as an ambassador for Ghanaian-owned ride-hailing firm Swift-Wheels .

I Can Stand Without Stonebwoy’ – OV Explains