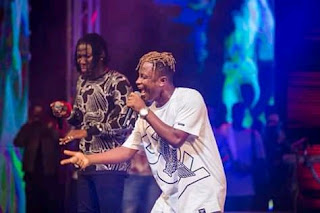 According to Kelvyn Boy in an exclusive interview with Fiifi Pratt on Highlife Paradise on Rainbow Radio 87.5Fm, Stonebwoy has done alot for him and that he will forever be grateful to him for making him an international artiste.

Burniton music group headed by Stonebwoy some few days ago in a press release indicated that it has ended its contract with Kelvyn Boy who was a recording artiste under the Burniton Music Group Label.

Although the contract between Kelvyn Boy and Burniton Music Group expired on January 21, 2019, the label said it continued to work with the Afrobeats artiste under the terms of his old agreement.

When asked what Stonebwoy has done for him ,Kelvyn Boy disclosed that Stonebwoy took him along to the most major shows he performed at.

Moreover Kelvyn Boy revealed that communication has been the problem and that he is surprised at why people are saying Stonebwoy has suppressed his talent which he sees as weird for someone to be saying that.
Kelvyn Boy is out with a new mind blowing tune which he calls Loko and it features rapper Medikal.
Source:

Sunshine Soldier Gets a Collaboration with Stonebwoy.