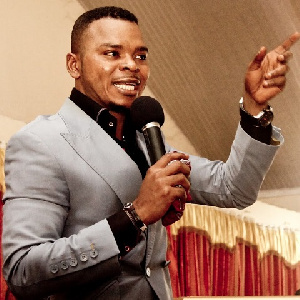 Founder and leader of International God’s Way Church, Bishop Daniel Obinim says he’s ready to face any legal tussle Kennedy Agyapong has threatened to engage him in.
Kennedy Agyapong since the start of his exposé has said he will not only strip Daniel Obinim of his glory but will also make the law deal with him.

Previously, he mentioned that Obinim used the logo of the Ghana Police Service illegally to declare one of his boys wanted because he bolted with his money which was meant to be transferred to Spain to purchase some instrument.

But speaking to Oheneba Media in a phone interview, Obinim mentioned that he’s ever ready to face the law wherever Kennedy Agyapong sends him to.

He said he has prepared his documents and is ready for any institution he will be reported to by the lawmaker.

“I’m ready for any institution that will invite me for any inquiries. If they invite me, I will gladly go with all my receipts and documents to defend myself but until then I won’t respond to anything about sleeping with any lady.

All I can say is since I got married to my wife, I’ve cheated on her and since she loves me that’s why she’s still with me. If she’s tired and want to go, she can go and get married to another person, I will also get married,” he concluded.

Robert Hud Promises to profess his diversity at his event ; ”Robert Hud Xperience”