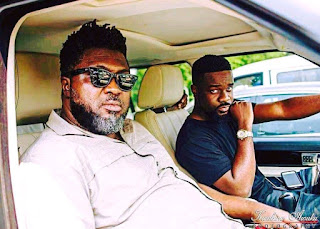 If there is one thing that makes up a success story, then is Someone’s past life experience. Sarkodie in a recent video Chat with Beatmaker and Producer Hammer the Last 2 On Instagram live gave an account of how used to live in poverty until he met producer hammer of the last two who help shot him to fame.
According to Sarkodie, He got a call oneday from producer Hammer telling him to come to the studio for a recording session, Hammer who was surprised upon seeing Sarkodie for the first time and seeing his stature and physique asked jokingly “so is this the Sarkodie we’ve have been hearing on radio” they both laughed and got along well afterwards.
Sarkodie said after the recording session with Hammer that day he got out of the studio for a quick nap and upon his return back to the Studio he heard Hammer telling his other colleagues he recorded earlier with that Sarkodie is the next big thing and they should watch out for him because his style is Unique.
The BET Heatmaker upon hearing this whiles eavesdropping on hammers conversation with his colleague rappers said that words gave him an assurance perhaps if he pushes further he would be big in future following Hammer’s last words of noticing his talent as unique.
Watch video below!

Shatta Wale Calls On NPP Government To Make Medikal, Sarkodie, Stonebwoy And Himself Ambassadors In Times Of Covid-19 Vaccination