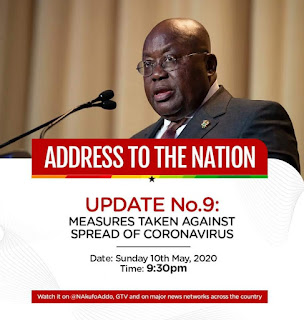 President Nana Akufo-Addo has extended the ban on the national ban on public gatherings including religious activities, festivals and funerals till the end of May.
The extension comes into full force effective Monday, May 11, 2020.
Delivering his ninth national address on the government’s fight against COVID-19, he said the closure of schools and ban on public gatherings had created a lot of inconvenience for many Ghanaians but “we have no option but to stay the course.”
“Tonight, I have come into your homes, to announce that the ban on public gatherings, as set out in Executive Instrument 34, has been extended, also to the end of the month ie, 31st May,” President Akufo-Addo said.
“So during this period, there will continue to be a ban on public gatherings such as holding of conferences, workshops, parties, night clubs, drinking spots, festivals, political rallies, religious activities, sporting events. All educational facilities private and public, continue to remain closed. The is still a ban on funerals, other than private burials with not more than 25 persons. It is noteworthy that the police is arresting and prosecution persons irrespective of their status in society who flout these regulations,” he added.

President Akufo-Addo on March 15, 2020, in a television broadcast, declared the ban on all public gatherings including conferences, workshops, funerals, festivals, political rallies, church activities and other related events as part of measures to stop the spread of coronavirus in the country.
At the time, Ghana had recorded six cases of COVID-19.
The President in that broadcast gave a caveat that private burials were permitted however mourners present must not exceed 25.
“Private burials are permitted, but with limited numbers, not exceeding twenty-five (25) in attendance,” President Akufo-Addo said.
He subsequently on extended the ban twice for two weeks; one on April 12, 2020 and the other on 26th April, 2020.
Already, schools have been shut down across the country. Most market places are open however under strict social-distancing protocols and the presence of handwashing facilities.
Some local assemblies have moved in to close markets where traders flout the social distancing directives.