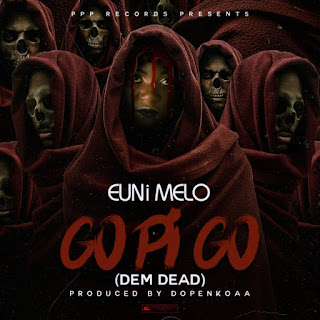 Dancehall music is said to be a vibrant genre which has seen some great Artistes thrown lyrical shots at each other since time memorial.
History has it that Euni Melo led a Lyrical attack on her music colleague Aroma Rule on a song tilted Bar16, and action that called for a reply from Aroma on the one sah no more tune released this past Thursday.
Euni Melo wish to make this even more exciting by dropping another shot in Go Pi Go, Dem Dead. This isn’t a diss song but a Lyrical sensitization to prove she is a better songstress than her colleague.
Euni Melo who currently works with PPP RECORDS teams up with Producer DopeNkoaa and Akthebeatz on the mix to present this deadly scary jam.
Listen and watch on YouTube
Euni Melo – Go Pi Go (Dem Dead) a reply to Aroma Rule_[ DOWNLOAD ]

Kofi Kinaata – Behind The Scenes ( Prod . By Two Bars)