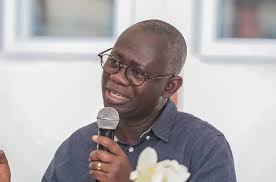 Information reaching us has it that the Director-General of the Ghana Education Service(GES), Professor Kwasi Opoku Amankwa has reportedly tested positive for the deadly coronavirus.
The Educationist who is a member of the committee chaired by the Senior Minister of Ghana, Yaw Osafo Marfo to delegate on the reopening of schools is among the five members to test positive for the novel virus.
Professor Kwasi Opoku Amankwa has been quarantined at a health facility receiving treatment after he was exposed to patients who already have the virus while the others who have not tested positive yet are under self-quarantine.
It would be recalled that the Senior Minister, Yaw Osafo Marfo has also tested positive for the novel virus according to the Information Minister, Mr. Kojo Oppong Nkrumah.
“Senior Minister Osafo-Maafo has been informed that his sample taken has returned positive for COVID-19,” he said.
Other government officials like Mathew Opoku Prempeh, Dan Botwe, Carlos Ahenkorah, and Peter Mac Manu have also been quarantined after testing positive for the virus.