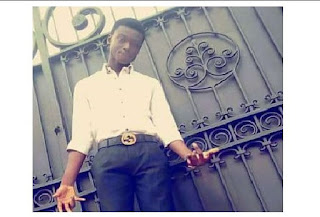 Adomonline.com yesterday detailed the abrupt downfall of a student of the Kwame Nkrumah University of Science and Technology Senior High School(KNUST SHS) recognized as Richard Sam who endured extreme stomachaches and was left in the possession of his associates while the school teachers remain to watch without getting him any clinical consideration.

The mother of the late student has at long last come out to give a chilling and nerve-racking record on how she lost her child.
Madam Comfort who gave records of the episode on Angel 102.9 FM as monitored by A2zgh.com said that a portion of the educators in the school was seen in the viral video remaining at the scene and would not draw nearer to the kid with the dread that he may have gotten the lethal infection.
She additionally uncovered that her child, Richard Sam was an ulcer patient and she attempted to visit him in the school on July 5 yet was dismissed by the security monitors who said they have been given exacting directions not to permit any parent to the school premises.
“I was prevented from seeing my child on Sunday, just a day before the incident. The security men at the gate drove me away like chicken,” she said.
Unfortunately, Richard got sick the following morning.
She also said that even though his son’s illness started in the morning, she called to be informed later that evening after the situation had gotten worst and refuted claims that she told the school, not to give her son any first aid medication.
“They could have taken him to the hospitable which was close to the school,” Madam Comfort said.
Richard was later taken to the hospital in the evening and the mom was made to buy all the drugs prescribed by the doctor but unfortunately, he passed away the following morning.
She also revealed how life has been difficult for her in taking care of her children. She said that she had to sell all her expensive clothes to take care of Richard and his siblings.
“I sometimes have to go to the seamstress to take back my clothes to resell just to take care of his education,” she said, adding she “suffered” doing menial jobs just to ensure the son’s welfare but that “amounted to nothing”.
The headmistress of the KNUST SHS, Felicia Asamoah Dankwaa, however, has been interdicted due to the issue that has disrupted academic work on campus.