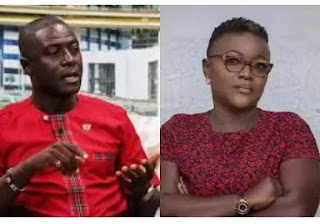 Nana Captain Smart has thrown jabs at all and sundry including his former employers the Multimedia Group with Adom TV as icon.

” Let me put this on record that FA BE WO SO is my personal property. I’ve heard of some Speculation of court action against me Nana Captain Smart “

” Let me tell you, you can send me to the highest court of the world which is the Hague. But nothing will happen. “

” You can’t fight me over Fabewoso. Never and ever “.

Speculation have been flying over social media that Adom TV have allegedly sent a Court order to Nana Captain Smart to desist from using the name FA BE WO SO which he was hosting on Adom FM and TV.

The gossip also indicates that Nana Yaa Brefo is also still chased to go and answer questions regarding some defamatory comments she made during her days at Adom TV.

The victim have allegedly sued the station with Yaa Brefo as a respondent. Since she is no more there, then she must go and defend herself.

We’re still waiting for an official statement as to whether the statement is true or not.

As Captain Smart has also warned that he don’t fear meeting them at the Hague.

Suspected armed robbers have shot to death a police officer and an eyewitness during a robbery of a bullion van at Korle-bu, Monday.

According to an eyewitness, the police officer was providing security for the van while the young lady only witnessed the incident. The driver of the van also sustained severe injuries.

Adom News’ Mensah Abrampah reports that the van carrying an unknown amount of cash was trailed by some men in a taxi and on a motorbike popularly called ‘okada’. When the van got to a less crowded place, the robbers attacked the van by firing indiscriminately at it, killing the police officer on board immediately.

According to the reporter, an onlooker also caught a bullet from the shooting and died on the spot.

The driver is receiving treatment at the Korle Bu Teaching Hospital while the dead have been taken to the Police Hospital for preservation and autopsy.

Meanwhile, the police are yet to make an official statement on the matter as they are currently at the scene conducting a preliminary investigation.

From people alluding that he knew he was going to die to people claiming he was an occultist to other happily rejoicing that he has died because to them, he led many to believe in things that were not from the one and only creator.

A couple of days ago was his burial and again, another overwhelming mystery has popped.

The camera captured an image that looked like an angel hanged in the air as loved ones file pass.

We are left to believe that, God has seen him and has actually sent down one of his angels to his burial.