Nana Captain Smart could not hold his dramatic anger when he hilariously picked a cane and descended on his colleague presenter for impregnating a student in a stage drama. 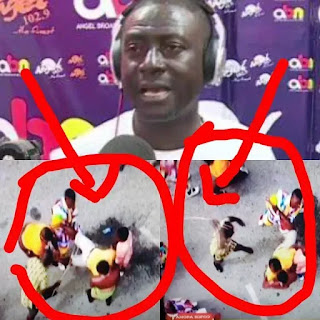 Kwaamena who acted as a paedophile in the drama depicting effects of teenage pregnancy had the dramatic beating of his life from Nana Captain Smart.

The girl who acted in the drama had accused Kwaamena of impregnating her.

” Get me a cane. How could you do that? Why should you impregnate a small girl as a teacher ? This will never happen in my school “. Captain Smart rattled his lines in the drama.

This kept the audience laughing out loud and mocking the culprit Kwaamena.

The end of the drama gave a moral lesson that teenage pregnancy is not something we should be proud of.