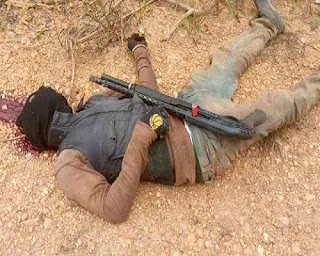 Two armed robbers have been shot dead by police officers from the Asankragwa Division of the Ghana Police Service in the Western Region.

The two were reportedly gunned down Monday afternoon in a shoot-out with the police in their attempt to rob a Chinese national.
Narrating events leading to fatal incident, Samuel Kakyire Obuobi of Ahobraseye FM told 3news that eyewitnesses recounted to him that four young men on Monday afternoon stormed Adowahu in the Amenfi West Municipality to rob a Chinese national suspected to be carrying gold…
Fortunately, the police received a tip-off on the intention of the four young men and quickly rushed to the town. A shoot-out ensued between the police and the four young men.
In the process, two of the young men were shot dead and an officer injured. The remaining two managed to escape and are currently on the run.
Crime Officer for the Asankragwa Division Henry Agbeve in an interview confirmed the incident and said the case is currently under investigation.
He said the officer who was injured is currently on admission at the Asankragwa Roman Catholic Hospital receiving treatment.
Source: Reportghana

Bill and Melinda Gates announced on Monday afternoon that they are ending their marriage after 27 years.

The pair made the announcement simultaneously with identical messages shared on their Twitter accounts. Melinda Gates also shared the news on Instagram

“After a great deal of thought and a lot of work on our relationship, we have made the decision to end our marriage,” read the statement. “Over the last 27 years, we have raised three incredible children and build a foundation that works all over the world to enable all people to lead healthy, productive lives.”

“We continue to share a belief in that mission and will continue our work together at the foundation, but we no longer believe we can grow together as a couple in this next phase of our lives,” continued the statement. “We ask for space and privacy for our family as we begin to navigate this new life.”

Bill and Melinda French Gates met at a trade fair in New York and began dating in 1987, more than a decade after Bill Gates first founded Microsoft. The pair wed in 1994 , at the Four Seasons Resort Lanai in Hawaii.
In 1996, they welcomed their first child, Jennifer Katharine. That same year, Bill and Melinda Gates established the William H. Gates Foundation, which focuses on advancing global health using charitable donations from Microsoft.

In 2020, the foundation committed $1.75 billion to respond to the coronavirus pandemic, including to help with the development and distribution of tests, treatments and vaccines.