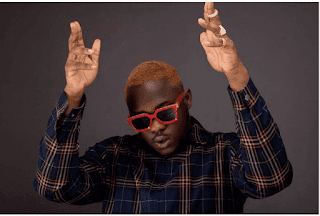 La Hustle singer Medikal did not only jump walls to send dining hall food home for his family when he was in the SHS, but he also stole a chop box from a friend in SHS 2.

We had earlier reported about Medikal sending food from the dining hall home for his mum and sister in what could be described as his dark days, which are well behind him now.

In what has been a week of revelations about his life and what it was like growing up before fame and riches found him, Medikal has said that he is offering a whooping Ten Thousand Ghana Cedis to one of his classmates.

He is offering the said classmate of his this amount of money what stealing his chop box when they were in the very last term of year 2 at the Senior Hih School.

He has since been in the hunt for the person whose green chop box he stole, adding that he had no choice then but to just steal the box belonging to his classmate.

“Whoever for Dorm 2 Wey you no find your chop box for SS2 the very last term, it was me. If you truly de remember and you were the proud owner of a green chop box come for ghc 10k right now ! Na I no get choice chale !”

Samuel Adu Frimpong indeed didn’t have it easy growing up. 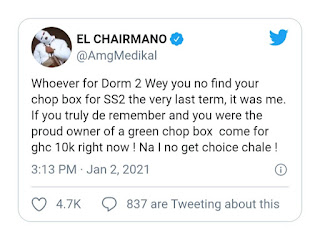