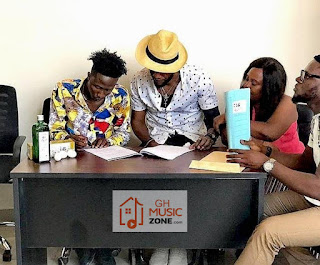 OBG music record label splits up with Cryme Officer after using schnapps and eggs as their witness when getting into contract a while ago.

Price Isaac Arko popularly known as Cryme Officer is a Ghanaian Musician signee under the label of OGB records lead by Ogidi Brown who is well known of his controversies with his ex signee Fameye the ”nothing I get’’ hitmaker. On 18th of December 2020 the unhappy signee Cryme Officer posted a video on his Instagram platform complaining about how his boss have been rejecting his calls and text since the day he advised him about how his controversies with Fameye have been affecting his music career . Under the post he wrote, “Ogidi Brown, my advice and calls you rejected. Give ears to my words else I may have no option than to fall out.’’

Early this morning our team had a letter coming from the camp of OBG records indicating the termination of contract by their recent signee, Cryme Officer forcing them to also cut contract with the artist. 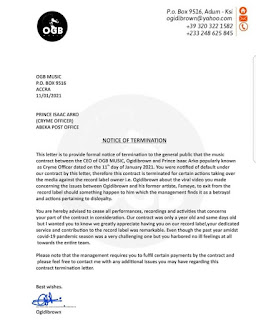 KIM AWARDS IS FULL OF CHEATS AND SCAM, I WAS CHEATED HANDSDOWN. SHADY LANEZ LAMENTS.