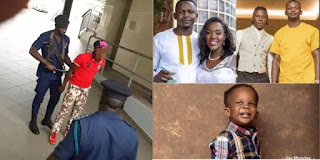 Stonebwoy and his wife Dr Louisa has dragged two bloggers to the police over publications indicating that his former manager Blakk Cedi is the biological father of their son, L Janam Joachim Satekla.

In photos circulated on social media a few days ago, the two influencers made posts implying that Blakk Cedi is the real father of the lad.

It appears Stonebwoy saw these posts and took on the perpetrators of such falsehood.

The two bloggers Gideon Ofori and Razak Ghana have been invited by the police to assists in investigations.

“So they are saying Dr Louisa’s son is for Black Cidi instead of Stonebwoy? I can’t believe”, Gideon Ofori wrote on 27th December 2020. 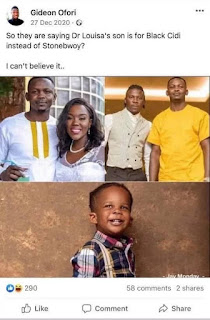 Gideon after receiving an invitation from the police has apologised to Stonebwoy and his wife pleading for their forgiveness. He noted that he has learnt his lessons.

He wrote: “On 27th December 2020 I made a publication on my timeline promulgating a false rumour that Dr Louisa’s son Is for Black Cidi instead of Stonebwoy. 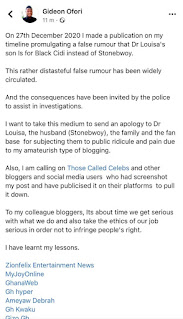 This rather distasteful false rumour has been widely circulated.

And the consequences have been invited by the police to assist in investigations.

I want to take this medium to send an apology to Dr Louisa, the husband (Stonebwoy), the family and the fan base for subjecting them to public ridicule and pain due to my amateurish type of blogging.

Also, I am calling on Those Called Celebs and other bloggers and social media users who had screenshot my post and have publicised it on their platforms to pull it down.

To my colleague bloggers, Its about time we get serious with what we do and also take the ethics of our job serious in order not to infringe people’s right.

I have learnt my lessons. 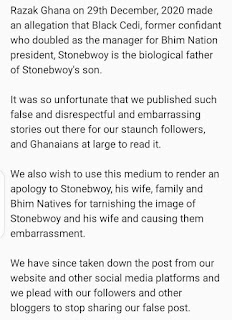