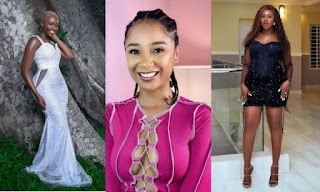 If you are a follower of entertainment news, you’d know that Fella Makafui was accused of being the brain behind the break up of her husband, Medikal and his ex girlfriend Songstress Deborah Vanessa. This is because, after rapper Medikal dumped Sister Derby, he ended up with Fella Makafui who he had sworn to be her bestie and nothing else.

Anyway, it wasn’t long before the world got to know about the affair between Fella Makafui and Medikal because they could no longer hide their affection for each other. They went ahead to tie the knot and now have a beautiful baby girl.

This caused a lot of rage among Sister Derby fans because a lot of them felt, she was betrayed by Medikal. Finally addressing the issue in an interview on Zylofon FM, Fella Makafui averred that, she has never met Sister Derby in person even though she bare her no grudges.

According to Fella Makafui, the only songs she listens to is what her husband, Medikal produces and she has never bothered to listen to what Sister Derby produces because it’s none of her business.

She furthered that, ” I have never met Sister Derby and I have chanced upon her songs on social media but I didn’t take time to listen because it doesn’t concern me.”

Euni Melo and Queen Haizel to tour The Eastern Region

I Won’t Return Any Of The Plaques Given to me, I Didn’t Steal Them – Stonebwoy