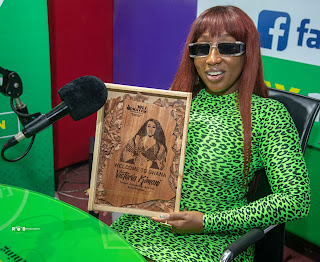 Kenyan-American singer/songwriter Victoria Kimani says being consistent is her main priority in the music Industry so to achieve basically the highest attainment, in aim of growth and sustainability of her career and as well build a lasting growth with her fans.

According to her, that has been and even become more currently because of the progress she seeks to make as an avenue of good repute among other things and as well, stay different from her peers in the Industry.
Speaking exclusively to Abeiku Santana on Okay FM’s ‘Drive Time Show’, Kimani said the only thing she thinks of on daily occasion with respect to her career growth is staying consistent in the game.
She said, “I don’t love parties, I’m that cool girl. I love music, love to write music, I like bring creative generally but outside of that, I have a life, I think sometimes people get so personal and more attached to their career and forget to have a life, have real life and do real things. I love spending time with real people. When it comes to accolades, am not much into it because these days, they ditch it out easily so I don’t really subscribe to accolades to be honest. Hard work, consistency and not stopping has sustained me to this level. I just keep on going.”
Controversies
Reacting to a question about beef making – what many term as one of the current source of securing fame in the music Industry, the R&B/Afropop singer said, “I do not subscribe to that.”
To her, it does not build a musician for a long term but does only for a short term which sound abysmal to her for any musician to think of placing all focus on such.
“The truth is that, I don’t subscribe to controversies, it doesn’t last and build a long lasting period for a musician. I think Ghanaians should focus more on the good aspect of promotion they do for their respective musicians. I know the idea that, the whole controversy thing works, but if the focus remains on what is happening in Ghana and the Industry – you guys sky is the limit. The saying that no publicity is bad, I actually don’t believe that because people have legacies – at the end of the day, you want to be known for something. I hear people do drama around and things but for me, it’s not cool for me”
Women Empowerment
On empowering women, Victoria said she believes the media can do more in scope of pushing for the songs released by women just as its done for the men for same attainment and establishment.
To her, the women empowering in Ghana is less as compared to the men because all attention has been highlighted on just men.
“Already African female artistes work twice harder like what the men do. The men can cough on a track and the whole media will be by his side, but the females can do the most amazing music and crazy visuals but won’t get same level of push. I will not say the African female artiste is not working harder, it’s basically left with the push from the media. We need same level of support and push”
About Victoria Kimani 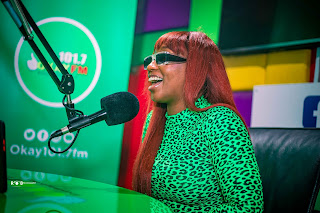 Victoria Kimani grew up in a very few different places, moving with her parents from Los Angeles to Tulsa, Okla., to Benin City, Nigeria and finally to Nairobi, Kenya when she was 16.
She spent her first sessions in the recording studio not long after moving to Kenya, and as she found her calling in music she also began to find her voice as a young woman.
In 2009 she joined a duo called Club Embassy and signed to Los Angeles Laker Ron Artest, released a mixtape called Diplomatic Immunity hosted by 50 cent’s DJ Whoo Kid, it got over 250,000 downloads and created a lot of Industry buzz…In mid 2010 the duo split and began working on solo project.
Victoria had then collaborated with Ron Browz, Maino, Jadakiss, Dj green Lantern, Busta Rhymes, Mario Winans, Cassie, Lloyd, A.I (Japanese superstar), Chris Brown, Diggy Simmons, Timati (Russian superstar) , Timbaland, White Nerd, Andy Chatterly, Pete “Boxta” Martin, Devyne Stevens, Konvict Music, Space Cowboy, Dawaun Parker, Diane Warren, Bamboo, Kimya, and countless other Producers and Artists worldids.
Her first Single and music video since signing to Africa’s most prestigious and cross over record labels, Chocolate City was called “M’TOTO” and it is tearing up airwaves and clubs across Africa and the UK. Her second single and music video “Oya” feat.
MI was the first Kenyan video to be premiered on VEVO. She was nominated for two Channel O Awards for both singles and performed on Africa’s largest Live Award show as well.
In 2012, the R&B/Afropop singer began releasing her first singles and, in 2016, dropped her first album, Safari. After parting ways with initial label, she released the Afropolotian EP.

Ms Forson apologize to bullet…after saying Bullet force her to get divorced…….

Cadbury Official Sponsor For The Saucy Trip to Prapram