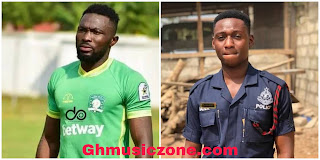 Chilling details of the Aduana Stars defender who is in police custody for allegedly knocking down a police officer with his car last night. The Police officer, Constable Amos Maatey was on night duty together with a colleague.

He sought permission to go and buy mosquito repellent on his motorbike. While returning, he got knocked down and died instantly.

Police later found out driver of the car was defender of Aduana Stars, Farouk Adams. He was arrested and subsequently placed in custody. 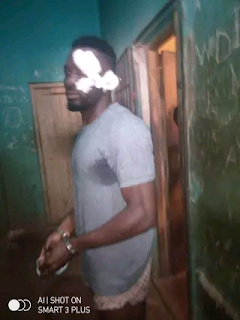 Farouk’s contract with Aduana has ended but out of loyalty, decided to stay back and help the team till the end of the first round of the league because the club was struggling defensively.

I’m reliably informed that, he has agreed a deal with a club in the United States, has already secured his visa and was preparing to travel.

But by twist of fate, he will be arraigned before the Wamfie Magistrates Court at 9am tomorrow.

Condolences to the family of the young officer.

Me : When Thomas Partey Was travelling to Spain for the first time ,he didn’t tell anyone 🙄

Naa Ashorkor Reveals Side Effects Of Covid Vaccine After Taking Hers

Suspected armed robbers have shot to death a police officer and an eyewitness during a robbery of a bullion van at Korle-bu, Monday.

According to an eyewitness, the police officer was providing security for the van while the young lady only witnessed the incident. The driver of the van also sustained severe injuries.

Adom News’ Mensah Abrampah reports that the van carrying an unknown amount of cash was trailed by some men in a taxi and on a motorbike popularly called ‘okada’. When the van got to a less crowded place, the robbers attacked the van by firing indiscriminately at it, killing the police officer on board immediately.

According to the reporter, an onlooker also caught a bullet from the shooting and died on the spot.

The driver is receiving treatment at the Korle Bu Teaching Hospital while the dead have been taken to the Police Hospital for preservation and autopsy.

Meanwhile, the police are yet to make an official statement on the matter as they are currently at the scene conducting a preliminary investigation.

From people alluding that he knew he was going to die to people claiming he was an occultist to other happily rejoicing that he has died because to them, he led many to believe in things that were not from the one and only creator.

A couple of days ago was his burial and again, another overwhelming mystery has popped.

The camera captured an image that looked like an angel hanged in the air as loved ones file pass.

We are left to believe that, God has seen him and has actually sent down one of his angels to his burial.