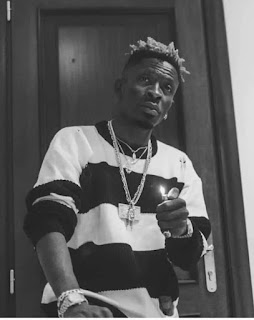 THE DROUGHT OF QUALITY SOUND/VIDEO DECLARED AT THE SM CAMP: Fans to endure substandard music videos and sound quality until further notice

I have watched Shatta Wale’s Instagram rant where he had reacted to the heap of matters arising at the Ghanaian music space championed by industry people who have registered their displeasures in Ghanaian musicians of not putting in much efforts to win the Grammys soon unlike their Nigeria counterparts.

The quoted divulgence are the words from the acclaimed dancehall king when he intended to tackle matters in regards to the Ghanaian artistes chastised and criticised by industry patrons after Nigeria’s Wizkid and Burna Boy were announced winners at the 63rd Grammys Awards.

Putting Shatta Wale’s statement into consideration, let’s understand that, no musician uses his/her money to purchase a Grammys nomination neither are they awarded after a price is settled.

The Grammys just like our local music award schemes opens nominations for interested persons to submit their product for consideration through the GRAMMY Online Entry Process (OEP).

After filing for nomination consideration, nominations are determined by Voting Members through the first round ballot or either the Nominations Review Committee or Craft Nominating Committee processes.

In simplicity, you sit at the comfort of your home with internet accessibility and submit your records to the academy to be considered a nomination if eligible.

If Shatta Wale says, he is not going to use his money to chase Grammys, he only meant to say, he is not and will never invest so much in his products just to seek Grammys nomination consideration.

We all may agree to the fact that his actions will not barely vest his Grammys loathe but will go down to put him in the books of musicians with substandard sound production and video qualities which remain as a bad remark.

Shatta Wale is an enormous brand and the most important thing at this stage of his career is to give to his buffs products to gloat of not the other way round.

Let’s shun the Grammy mantra and focus on the digital space where musicians are rated to meet corporate gigs.

A time may come, where his brand may derail to the abyss since he is not willing to put out quality products that can stand the test of time and go along with the new age.

After all, he is not ready to spend Ghc5k and Gh¢4k on music videos but will pick his available (Substandard) tools and take a shoot at Nima (a suburb in Accra) for his music videos and expect a huge  stream from his fans while he comes on social media to brag of being the richest and only international artiste Ghanaians have had.

Every minute of his just-ended live video saw him brag about his acquisitions and by so doing, he make sure he puts his critics in a place of ridicule.

Every discern SM enthusiast should at least foresee that Shatta Wale has nothing to offer except the substandard music videos which most of you have been complaining about since.

I am not the right person to advice Shatta Wale because I am told he hardly listens to those who are even close to him but follows his instincts to do whatever he does.

Shatta Wale is all about making money and he does not care about the feelings of his fans. Your rants, opinions and suggestions mean nothing to him and such an autocratic leader can’t sustain his gang in the dispensation of democracy.

Every fanatic’s pride is to log to his artiste’s catalogue and brag of quality products, accolades and endorsements.

Maybe he is retiring the music trade and do not want to invest any longer…. The old Shatta Wale who was so ambitious in giving to the fans what they expect of him is missed.

I know most of you are of a head with me but since you want to please the king and seek validations from people within, you will give an eyebrow to this to actualise what you are known of beneath this post.

The drought of enjoying quality sounds and music videos has been declared, until all becomes one, let’s endure it.