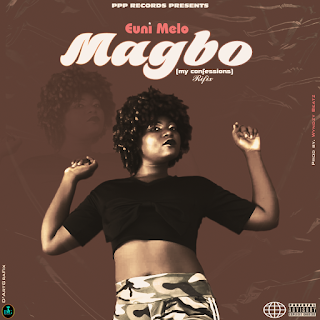 euni melo the multiple award winning songstress is here again with another great piece of music for her Ga speaking community and fans, Magbo is a refix of My confessions, a song released from the Confessions riddim hosted blogger Yung Kasa and produced by Wyndzy beats.

Due to her roots Euni melo felt it necessary to do a ga version of the song she previously sang in English, it is very important to consider your roots when doing something special, to her my confessions was a song very dear to her heart and felt her people had to understand the lyrics of a song she finds special.

The winner of the best new act in gome awards has been a key advocate of the language and always wants to get her people the right contents to relate to.
Magbo is a Ga word that translates in English as I would die which expresses emotions of lovers.

Euni is known for her popular ga song Naakp3 and her maiden Album titled Melodies to Melo which had a worldwide success on boomplay and audiomack, once again Euni Melo has something warm and smooth for her fans.
Enjoy

Franca Asare outdoors “All Knowing God” off her Album. Produced by Roro