Ghanaian musician Yaa Pono last Wednesday wowed AUCC students during a rare appearance at the Ama Ata Aidoo Centre for Creative Writing, AUCC, on MC Benny More’s #TalkingDrum weekly personalities program on #Afronovaradio. The up-close-&-personal meet which also streamed live on Facebook was attended by some 30 enthusiastic and eager students. Following are excerpts from the interview.

YAA PONO: Where I come from in the Volta Region, a man can be called Dela and a woman as well. We don’t have gender in our names. The Togo president for instance is called Yaa. The Yaa came after I got the name Pono – which means “Prince of New Order”. I was doing comic rap…a lyricist…so everything I say must be heavy and deep. I like the Pono because most of my music are 18+ anyway: I don’t do music for kids. So when it sounded that way, I liked it. I was just Pono, until the Yaa was added to it over time. And now, they call me PonoBiom.

BENNY MORE: Still on the name Yaa Pono: there are people that believe that it has some negative sexual connotations to it because of how it sounds.

YAA PONO: Let me teach you one thing: every room needs a door, but before you fix the door, you must hammer it, you understand? You must cause severe damage to the door as you hammer nails into it. I don’t believe names give life to things. It’s the listener who does.  What do I do? I do music. I always dedicate my time to music. And one thing about music, if I don’t come here and explain, people will view it the way they want. When you do music everything that people think about you is how they think. Not what you think.

BENNY MORE: What do you tell people when they say you thrive on controversies?

YAA PONO: I don’t tell them anything. Because if I have to explain I would have to go back to the beginning.

BENNY MORE: Your views on the music industry in Ghana

YAA PONO: When it comes to Ghana music, there’s no industry. I built my own music industry because I realized there was no industry paying directly. If you remember…back then, I was on YouTube when there was no Ghanaian artist on YouTube. I started collecting my royalties from YouTube long ago. So I created my own industry.

BENNY MORE: Can you ever be friends with Shatta Wale?

YAA PONO: Yes, we can be friends, but not good friends. Because I really respect relationships. For example, I and Nana Achampong have had a relationship from when I was little. I respect relationships. I respect the relationship I have with my mother: I cannot meet another woman and love her more than I love my mother who raised me. I respect my day-one friends. Especially those with whom I started out in Tema. So, after the beef with Shatta Wale back and forth, people expected us to be friends. But we have to go back to how we were before, or? Let’s say you and I were friends and we fight: we have to go back to how we were before. But for now I think we are friends. But we aren’t close.

BENNY MORE: How did you feel when you found out Shatta Wale was arrested?

YAA PONO: I felt really bad. Nobody would like to go to jail. And it’s a very very – It must be really hard ‘cause Shatta Wale likes to enjoy, and in there he can’t enjoy. It made people realize that musicians aren’t above the law. 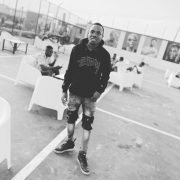